When I was in my mid-20s living in Jakarta and trying to learn Indonesian, I reached a point where I felt I had to start reading more about Islam. Partly this was because so many of my students were – to varying degrees – Muslim; partly it was because the practising of the religion was so deep-rooted in the day-to-day life of so much of the country; and partly it was simply because I found it interesting to try and get my head round a worldview so incredibly different to the one I’d grown up with myself. Concepts and ideas from Islam were also obviously widespread in Indonesian itself, with the words for many more abstract ideas being derived from Arabic. 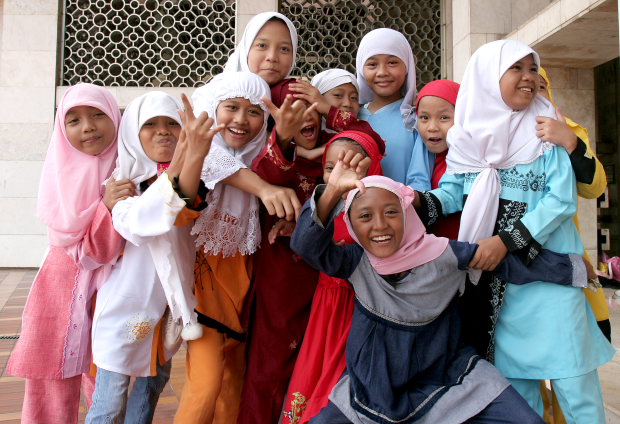 One of the more fascinating notions I grappled with was the idea that the word Islam itself originally means submission or surrender in Arabic, a fact more recently made more complicated and controversial by the Ayaan Hirsi Ali film Submission, and its subsequent enthusiastic promotion by those on the right. The root of the word Islam, though, is salaam, from which can also be derived the words for peace and safety. Now, many religions have a concept of surrender to God. In Jewish history, the ancient Hebrews had a long period of prosperity and stability when they obeyed God’s commands; in Christianity, surrendering to God is a way of putting your life into more capable hands. In this sense, the idea of obeying the commands and logic of a higher power and trusting in a wisdom that may not always be apparent to one can actually be a way of bringing about peace.

Now, you’re probably wondering where I’m going with all of this, aren’t you? Bear with me, OK. Despite the fact that any discussion of submission and resistance feels decidedly dodgy in a post Jimmy Saville / post-Operation Yewtree world, where every week another of the creepy celebs that were all over the TV of childhood like a bad rash is arrested and charged with some form or other of unsavoury retrospective sexual coercion, these two concepts are actually at heart of language learning!

To this day, I can still remember the almost physical sense of relief and the easing off of tension once I finally just stopped fighting it, stopped trying to impose my own pre-programmed system onto it and simply gave in to Indonesian and its own weird internal logic. For maybe the first year or so of my time in the country, I’d been unconsciously bridling at what seemed to me to be the peculiar sentence construction, the language’s stubborn refusal to express itself in ways I expected it to, the different ways in which divided up the world, the three different versions of I and You, the way we-but-not-you was one word, kami, and we-including-you another – kita, and so on. And then one day, suddenly, luckily, the fight just fell away and I realised that there was no way i was ever going to be able to change the way things were and that either I’d have to ship on out of the kitchen or else simply embrace things as they stood, submit, surrender. And in doing so came a kind of peace. And considerably faster and less stressful progress.

Now, I see signs of this resistance all the time in my classes – and I’m sure you do too, whether you’re conscious of it or not. The questions are never-ending:

“But why is it a football PITCH? Why not football field? I mean, you call the position midfield, don’t you? Not midpitch. In my language, we use one word for these two ideas.”

“But it’s the same: It’s a long time I haven’t seen you and I haven’t see you for ages. Why I need to change it?”

” You mean I can’t say Alex Ferguson is A FLAG? Like a FLAG of Manchester United? No? But that’s crazy. In my language we say it like this!”

And on and on it goes. These ones are just from the last few days with my Upper-Intermediate group and so are fresh in my mind, but you’ll recognise the genre no doubt. And the stiffer the resistance, the less learning takes place, as the students are constantly waging war against an implacable, uncaring enemy that will never bend even an inch to their own futile requirements. There will only ever be one loser in this war of wills, and it won’t be the language, for sure!

As language teachers, we have a key role to play in this ongoing struggle, as our students rub up against the different, the unexpected, the inexplicable, the frustrating, the downright weird and simply wrong (to their minds). Our job is to provide the oil, to smooth the lurching uphill journey towards greater noticing, more acquisition, more (linguistic) assimilation, more acceptance of norms – and to lessen resistance at every turn. Our job is to smile and say:

“There’s no reason why we have two different words where you have one. It’s just the way it is, OK. We say MIDFIELDER, but we play on a PITCH. That’s just the way it is. We also say PITCH for cricket and rugby as well. yeah, yeah. I know! You think cricket’s crazy too. There you go. What can I say?”

“Because maybe in this context the son is very young, so he’s new to the world. How do you say this idea in your language? How would you express this concept? OK, so it’s different, but that’s how it is in English. You can also say my new job, my new girlfriend, my new flat and so on. Don’t you use NEW in these contexts? It’s the same idea.”

“I don’t know if you’d noticed, but English isn’t Italian! Sorry to tell you, but that’s a sad fact of life. I know what you mean, though. You mean like he’s a symbol of the club or something, right? We just don’t use the word flag like that. It sounds funny!”

It never ends, and it’s essentially a million ones of saying “I know! It’s different! Ha ha. Crazy English! Who knows why? To make life hard for you – and to keep me in employment!”

Which, mercifully, it HAS managed to do thus far.